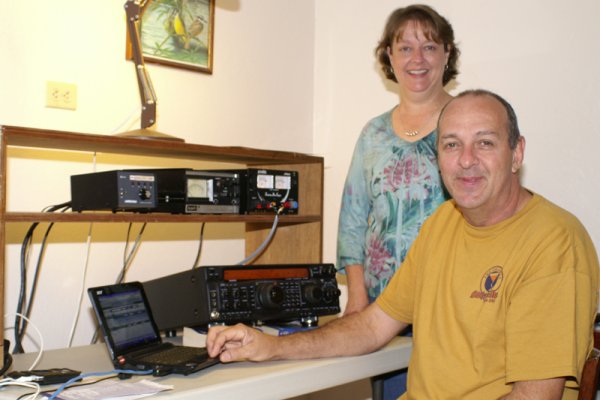 This trip wasn't to be a full time contest operation but rather a trip for me to propose to my lovely girl friend Pam. On the second day I took her to Horseshoe
Bay overlooking the beautiful blue waters and popped the question. She said "YES"!!!! I am truly blessed to have such a wonderful person in my life.

As for the contest my goal was a million points and hoped by operating all bands that I could give many the needed VP9 mult. Right a the very beginning of
the trip my computer had problems but thanks for W4TV from microHAM who replied within a few minutes I was able to get everything working. But at the start of  the contest my computer locked up and it took 30 minutes before I was back on the air. I found out later that the culprit of this entire mess was "X10" the security cam software. Once I went in to the device manager and ended the process my virtual com ports started working. It took me forever to figure this
one out and had almost given up on the contest.

I usually don't operate assisted but thought I would give it a try although 95% of the time I didn't use spots as my score shows the lack in Zones and Mults.
Since this was a part time effort I'd run for the most part and it was fun having those juicy mults call me for a change. I had some line noise to deal with on this trip and to use the noise blanker was full time which distorted some of the signals making it difficult to copy the non stop callers. The pileups were incredible thank you everyone for your patience.

The bands seemed to be in good shape but a constant battle to keep a run frequency. I guess the days of asking QRL? is no more and now a Rock'em Sock'em match to see who wins out. Some operators just don't listen but rather call and call no matter what is sent. I heard many stations calling while I tried to
send my call. What a mess at times just to work one station. :(

After the beginning problems the Yaesu FT-920 was flawless, N1MM worked well although I had a slight hesitation in keying. I never did find the culprit to
this even after turning off the DX Cluster, Bandmaps, Q&M needed, etc... The antennas a Cushcraft A3, 160/80 Inverted L, and 40 Dipole all about 30 feet
high performed well. I didn't try to move any stations although I was asked to move a few times and that was fun working ZD8O, V47NT, and others on 3 bands without having to bust the pileups. I found K3LR on 15 and 10 meters very late the first night and soon had them on all 6 bands. Unfortunately VP9 doesn't get the good 10 meter openings like the guys/gals down south. Sunday I listened to many stations on 10 running US/EU and I not hearing them. The band did open to the states for a while but didn't produce a lot of stations.

All in all it was fun and a learning experience as single op in the jungles of  CQWW. Pam and I plan to be married in Bermuda so another trip is in the future
and who knows maybe around another contest. :)