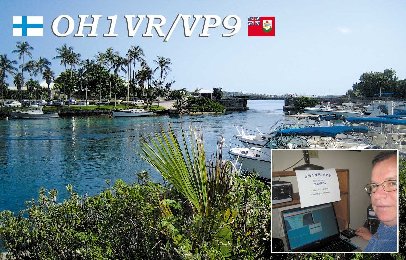 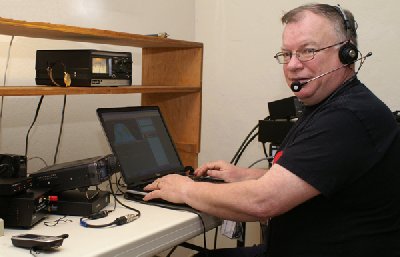 I and Zaba OH1ZAA arrived to Bermuda for a small scale Six Meters DX-pedition on May 7th. Our aim was to work Europe on six. On May 10th at 1527 UTC I spotted my self into DX Summit. A couple of minutes later my 'OH Pile Up' started: OH3XA, OH2ZH, OH3UU, OH3BYZ, OH2ZZ and 20 minutes
later still OH3FK. I made first ever OH - VP9 contacts!
It was more than we expected. Coming to distant place from home and working home on six was unbelievable. Our trip to Bermuda ended on May 13th - not a single beep from any other EU -stations during our stay.

I would like to say: Mission Achieved! More at: oh1vr.net and PDF of the event available here.

Seppo OH1VR (This was my sixth trip to Bermuda and Ed's VP9GE place)
Dear Ed,
Thank you very much for your great hospitality during my five days stay in Bermuda. Operating from your site was again a pleasure: Huge Pile up's on all bands with 100 watts. Total: 3400 q's - over 1000 q's on 160 mtrs was more than I expected.

A participation into 2010 CQ WW 160 mtrs contest was the theme of my fourth trip to Bermuda. Earlier I have participated twice CQ WW CW SB 20 LP
from your QTH (3rd and 2nd in the World in my class). It seems that this time my 881 q's and the score about 0,5 million points will be enough for the place among top six scores.

I can say: The aim was achieved!

This was a good start for my '50 years as OH1VR' mini dxpeditions series.

73, Seppo OH1VR
Dear Ed,
Thank you very much for your great hospitality during my first - not last - visit to Bermuda.

We (I and OH3SR) arrived to Bermuda five hours before the start of the CQ WW CW. Because all was well prepared by you we almost just switched radios
on and started the operation.

This e-mail is also my tentative new reservation for 2008 CQ WW CW! More about it later.

I thank you very much for the good care taking. You made our trip to successful.